Meet Hotei and Benten — Gods on the Earth

Here are the first two T shirts from the new Gods on the Earth album of men and women’s tees. More buddha T shirts and other deities to come.  Get in touch and let me know what you think. 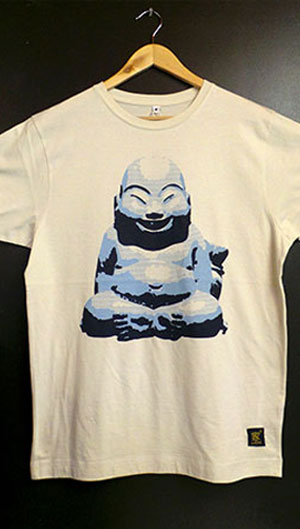 Known as the Fat Buddha or Laughing Buddha, Hotei is one of Japan’s Seven Gods of Luck. He is the magnanimous god of contentment and happiness, guardian of children, and in recent times, the patron of bartenders and restaurateurs. He carries a large bag of food and drink which never empties, which he uses to feed the poor and needy. The Japanese spelling of  “Hotei” literally means “cloth bag.”

Hotei is usually shown holding a Chinese “wish giving” fan called an oogi 扇, and either seated or sleeping on his bag, but also dancing, walking or pointing at the moon. Sometimes, he is shown surrounded by a group of children, romping and squealing in delight around his jolly shape. 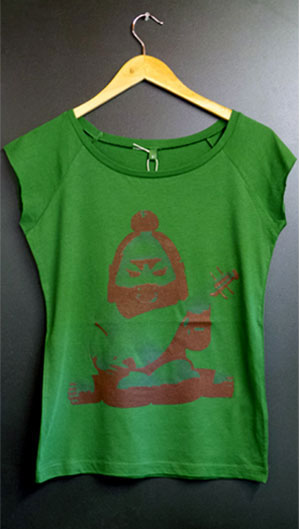 The water goddess Benzaiten (or Benten) is another of the Shichi-fuku-jin (Seven Gods of Lucky), known commonly as the Goddess of Wealth and Good Fortune. In Japanese mythology, she is the Buddhist goddess of literature, wealth, femininity and everything that flows; water, time, eloquence, music and knowledge. Hence, many of her shrines are found near the sea, rivers and lakes. She is often shown playing the biwa, a kind of lute, but, has many other forms, including a three-headed snake to a divine representation of the sun god.

Benten originiated from the Hindu river goddess Sarasvatī, also a patron of literature and, was introduced to Japan (via China) in the mid-7th century as an eight-armed martial god holding weapons as the Defender of the Nation and Protector of Buddhist Law.